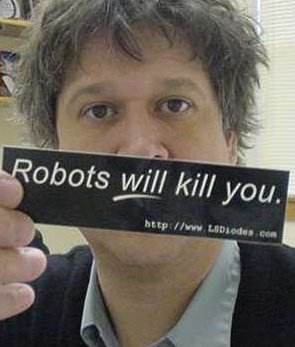 The Running Man, Running Scared, the other Running Scared, Cool Runnings, Cannonball Run, even Chicken Run.  These are movies where run in the title, often the gerund form of the word, means that the action moves along at a running-like pace.  So, if you are looking for a fast-paced action movie, you might be excused if you think Blade Runner 2049 will fit that mold. But, I am here to tell you that that is not the case, and the pace of the movie is more like that of metal rusting.  Many critics have mistakenly cited 2049 as the year when the story takes place, when it is actually the approximate running time…

It’s not that there isn’t any action.  Indeed, the title character, “K” (Ryan Gosling), travels from a farm outside of L.A., back to the inner city, to a dump back out yonder, and even off to Sin City, getting his head beaten in at every stop.  But the movie sure takes its sweet time between stops.  In this sense — and probably in more senses I’m willing to admit — the movie is reminiscent of another sequel from earlier this year, War for the Planet of the Apes, where the technical aspects were overwhelmingly awesome, but we spent a lot of time watching the actors emote rather than actually do anything.  Instead of people in ape costumes pretending to be human, we have humans pretending to be robots trying to be human.  On the other hand, if your idea of a good time is watching Ryan Gosling lay down and take a nap in a snowstorm, then you are in for a real treat.

Aside from my objections about the pacing, I loved it.  The Blade Runner this time is indubitably one of these very humany “replicant” robots, so much so that he doesn’t really even have a name: “K” is short for KD9-3.7, his model number or somesuch.  This is a change from the original, where it doesn’t even seem to be a question as to whether the title character, Deckard, (Harrison Ford) is a human or a replicant.  Then that question sort of insinuates itself into your consciousness and all of a sudden it’s like, holy crap, what did Edward J. Olmos just do?  What he did was drop a truth bomb that makes it rather obvious that Deckard himself is a replicant (though L remains in denial on this point), and you are left sitting in a stupor as the ending credits roll.  But, if you didn’t believe it coming out of the first movie, this movie is unlikely to clear things up for you.

What is certain is that the world is hurtling towards an apocalypse.  Blade Runner 2049 finds us in some sort of post-apocalyptic state stemming from a 10-year blackout.  Whatever happened left cities empty and laid ecosystems to waste, leaving us without any flowers or trees or things that grow, farming worms for protein.  The movie alternates between foggy mist and various shades of rust, and I don’t remember seeing the sun once.  The settings weren’t as convincing as they were disturbing, and the movie reveals more than enough to be disturbed about.

This all seems bad enough, but the movie’s real thesis is that the apocalypse will take another form, with technology and robots and artificial intelligence insinuating themselves in such a way that pushes the human race towards irrelevance and, ultimately, obsolescence. One endpoint, for example, is that we have a ridiculously good looking robot (Gosling) hanging out with a ridiculously good looking hologram of a young woman.  In this case that hologram is a young “product” aptly named Joi (Ana de Armas), who is tasked with keeping K company and sporting whatever fashion captures the replicant’s fancy these days.  At some point, technology will be able to replicate and exceed the best (and worst) humankind has to offer, and how are we mere mortals supposed to compete with that?

The movie actually provides something of an answer to this question.  It’s not that humans are worthless, far from it.  Human ingenuity is the straw that stirs the drink here, at least for the time being.  Modern technology can take the best of what we have to over, bringing the greats back to life – Elvis, Sinatra, Carrie Fisher – now and whenever.  The only thing modern technology can’t do is bring back the nature that is so dearly missed.  And, like in the first film, the replicants soak up as much rain and snow and trees and flowers as they possibly can, because feeling the rain and snow on your face is pretty awesome, even if watching someone else do it gets a little tedious.

The great irony here is that the main human character is a police lieutenant (Robin Wright) who sees it as her purpose to “maintain order.” The irony is that the order of the day is the slow march to human extinction at the hands of its own creations.  We saw this story not too long ago in Alien: Covenant, with Guy Pearce playing god in that one, and the notion of a creator was no small part of the original Blade Runner.  This theme simmers throughout the movie, as after Wright and Olmos, I am not sure how many characters are in the definitely human category.   The upshot is that this movie is not so much about what it means to be human as it is about what happens when technology methodically pushes humans to the brink of extinction.  If you are on the human side of this one, “maintaining order” seems like the wrong choice.

The movie had a lot of other cool stuff going on, the visual awesomeness being the most obvious.  Talk about setting the tone.  We watched the 3D reel and it was beautiful and pretty seamless.   And there really were some interesting characters and some reasonable action when they got around to showing it. The big story is that Harrison Ford returns as Deckard, and once again he shows why he is our greatest American movie icon.  He, too, takes his turn kicking the crap out of K and then gives his dog some booze. Incredible.  It is also not clear whether the dog is a robot or not, and, once again, it doesn’t really matter.  I will go back just to see that part of the story arc.  Sean Young also returns from the original, and she hasn’t aged a day.

We also get some new characters, of course.  Jared Leto is appropriately creepy and objectionable as the creator of the new class of  replicant.  He makes Tyrell from the first movie seem like St. Francis of Assisi.  One of Leto’s creations is his love interest, Luv (Sylvia Hoeks), who is exceedingly convincing in her role as the evil robot bagman, making Leto of secondary interest.  We also get to see a rather unusual sex scene involving K, Joi, and Mariette (Mackenzie Davis), possibly the most original thing in the entire movie.  Upon reflection, I don’t think it makes one bit of difference to the story line if Mariette is a human or a replicant.  I am guessing she’s human, but she certainly bears more than a passing resemblance to the spectacular Daryl Hannah replicant character from the first movie. So, who  knows? And, ultimately, who cares?

And so it goes with this one.  More questions than answers as far as the details go, but the big picture is clear enough.  It’s only a matter of time before the robots take over;  we will just have to wait to see whether it’s the good or the bad ones in charge when all that orange dust finally settles.