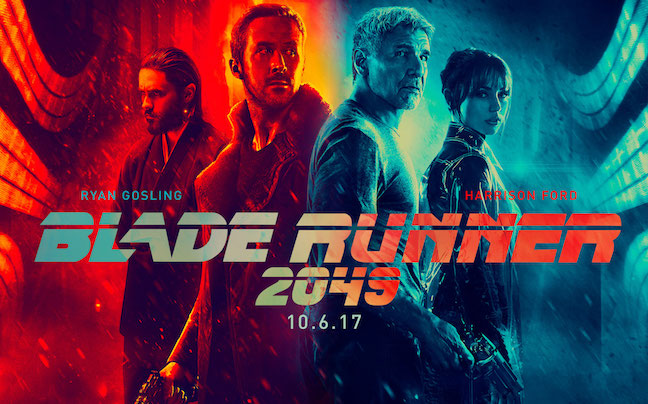 JUST FYI – POSSIBLE SPOILERS so go see it first if you are worried about SPOILERS.

L & D watched Blade Runner 2049 in 3D. I thought that the epicness (wiktionary: The quality or state of being epic.) of the film merited the 3D treatment and it was handled extremely well. Even what you might normally call a cool shot like a birds eye view from a tree limb was brought to life with the effect. Speaking of epic, the storyline of this film seemed directly out of the Bible, particularly the Old Testament story of Moses, a child who is hidden, adopted by the oppressor and would become the leader of a revolution.

I did enjoy Blade Runner 2049 but if you are not a fan of the original film or are unfamiliar with it, I highly suggest watching that one first. Only a Blade Runner fan, or I suppose anyone with a serious thing for Ryan Gosling (which yeah, is a lot of people but still) could sit happily through so much silent acting. I am certain that if one was to cut out all of the seemingly endless stares and deep thoughts moments at least an hour of this 2 hour and 43 minute behemoth could be cut back. I was disappointed by the lack of action but not as much as in another Gosling snoozer, so-called Drive. To say the pace is plodding would be an insult to turtles everywhere. Worst of all, the philosophical implications of androids and AI have been covered much better in films like Alien: Covenant (not accidentally directed by original Blade Runner Director Ridley Scott), Her and Ex Machina. Even visually, director Villeneuve went into his bag of tricks as the final scene with Harrison Ford putting his hand on a glass wall was an exact copy of the scene in his 2016 sci-fi gem Arrival, when Amy Adams makes contact with the alien heptapods Abbott and Costello. For me, and this was an L & D split decision, Arrival was intellectually stimulating and original. As for 2049, one could argue that as a sequel originality is not the foremost concern but rather being respectful to the first film. I would agree to a point but at the same time, homage and originality should go hand in hand. To ironically steal a line from the political drama NO, Blade Runner 2049 feels like, “A copy of a copy of a copy of a copy of a copy.”

Still, I love this aesthetic so much and my nostalgia for how mind blowing it was in the 80s kept me rapt as I watched 2049. Even over the audible yawns and snores of the few people in the audience.

Yes, I would watch it again. I’m still not convinced, or maybe I don’t want to believe that Deckard is a replicant.