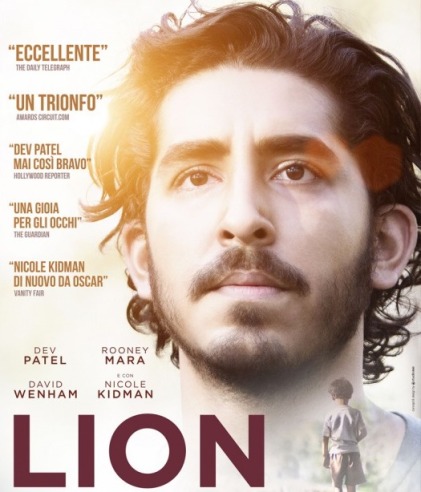 For anyone who has done any significant exploration into their genealogy, Lion is going to be a powerful experience. I watched the third act with a lump in my throat.

This film, whose simple story could easily be described in a line or two, to the point that you might consider not watching it, was actually layered and complex. The film is carried by a brilliant young actor Sunny Pawar (I haven’t seen such great acting by a child, in fact all the kids in Lion, since Beasts of No Nation in 2015) and also Dev Patel who is deservedly up for a Best Supporting Actor Oscar.

Lion has enormous heart. In this past year of weekly movie viewing, I have come to realize that it’s one of the single most important elements in a film. In current movies, technical capabilities are limitless and have generally been conquered via VFX and/or tons of cash. So for me, production value, though key, will not save a movie if the story is about let’s say two self-absorbed kids seeking fame at the cost of their own love. But in Lion, the story is one that, like Moonlight, centers around self-discovery. And this journey is absolutely necessary for the continued survival of the protagonist. The stakes couldn’t possibly be higher.

Lion made it right under the wire into my top 10 list for 2016 and I highly recommend it.