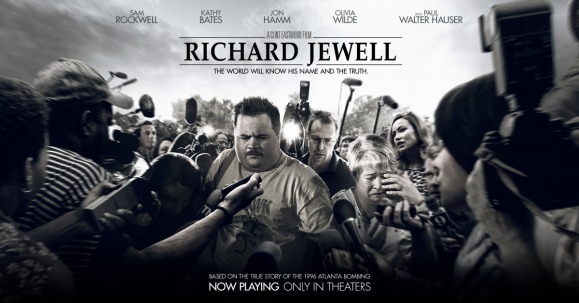 I was mesmerized by the performances and by this standard alone I recommend Richard Jewell.  It’s satisfying to see a film that can rely and succeed almost entirely on the great work of its actors. Richard Jewell boasts some of the best actors in the world including Cathy Bates and Sam Rockwell, laying their talents and hearts on the line for us.

I didn’t know the story of Richard Jewell or any of the details in the 1996 Summer Olympic bombing in Atlanta, so that was intriguing in and of itself. Furthermore the film is pertinent in terms of the FBIs’ abuse of power. When a secret court system like one we have here in the U.S., called FISA, calls you out in the press, like it did to the FBI this week, you know you have some issues. But hasn’t the FBI always had issues? How about the executive branch and Congress? Another great story from this week that got very little attention was how since at least 2003 the government has lied about how the war in Vietnam, I mean Afghanistan has been going. The film does not let the press off the hook either. Though the director of this film famously married and then divorced a reporter so who knows, maybe he has a personal axe to grind? One of the main takeaways from Richard Jewell is how little things have changed in U.S. society in the past 23 years. This is the system we live in and this is our human nature, so only the players change as the situations must by and large remain relatively the same. It’s nevertheless a cautionary tale worth heeding.

One thought on “Richard Jewell”