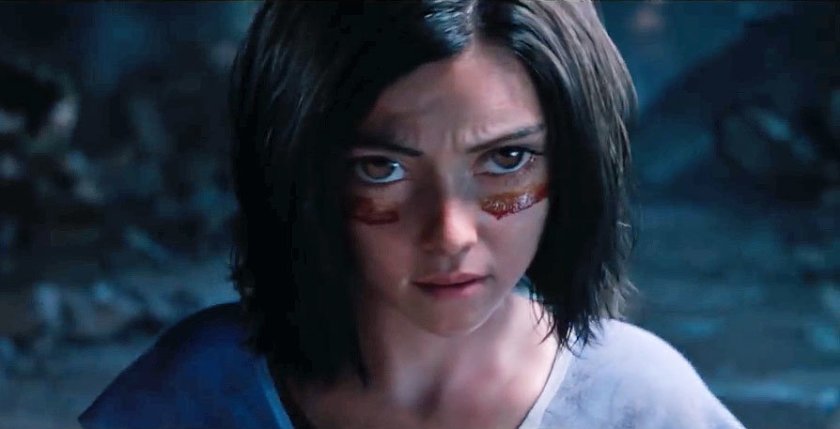 I was afraid that Alita would boil down to a cool special effect searching in vain for a story. And it was sadly just that. Not even the all-star team of Robert Rodriguez, James Cameron and Bill Pope could save this snake of story from eating itself. A homage to everything from Blade Runner to Ready Player One the remarkable visual effects creating the protagonist Alita, played by Rosa Salazar, particularly stand out in a fresh way. In fact, if you considered Alita simply from the point of view of the effects it would be a fantastic film. We watched in 3D and the depth of a few of the shots were sick without making us sick. Though some foreground elements did seem distracting at best. You would think that by now people would have gotten the hang of how to shoot 3D. Not yet. But compared to other 3D films, Alita seemed almost designed for the experience.

In the same way that the sum talents of the all-star filmmakers didn’t add up to a stellar film, all the effects in the world in and of themselves, didn’t make for a compelling story. There are plenty of interesting supporting characters but there are also obvious and cringe worthy tokens. And for a film co-written by a woman, it’s disappointing to note that Alita: Battle Angel glaringly fails the Bechdel Test. According to an interview with her in the Hollywood Reporter, co-writer Laeta Kalogridis likes to tell the story of how she got fired off Bionic Woman in part because she was told that she didn’t know how to write women characters. I don’t think the intention was that she stop writing them completely.

The sort of Running Man meets roller derby aspect of the film to me is where credulity breaks. Where the film a la Arthur Herbert Fonzarelli on a waterski on a lake jumps the shark. It’s an obvious, and as D would say Deadpool would say, bit of “lazy writing”.  An absurd ploy for action that unnecessarily moves the film into “Feed the Hollywood Machine” territory. If the writers had as much faith in the life and stories of these characters as they do in computer generated imagery, Alita would have had a chance to breakout of the stockpile of special effects driven yawners. Note: Thankfuly it’s the end of Oscar season and we can expect some more interesting films to be released soon.

If you are really into sci-fi or computer graphics driven films you might find Alita entertaining. I know we were actually highly entertained but mostly because we were saying the lines out loud about 10 seconds before the characters delivered them.

Curiously, the only two other sentient beings in the massive theater were a man and his dog. The man was laying down across a few seats fast asleep but the dog seemed to be really into the ending credits. There is a scene in Alita where a pack of robotic dogs goes after a bad guy, so who knows, maybe the canine in your life would really enjoy this film.