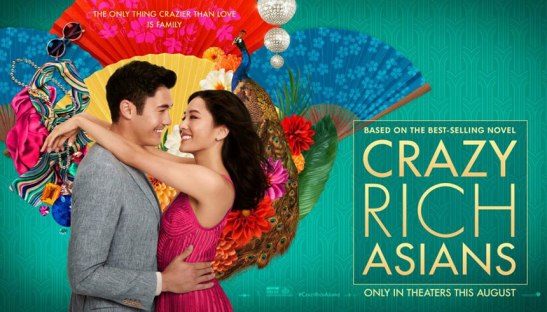 Crazy Rich Asians is the Gone With the Wind of romantic comedies with its immense scope and production value. But within the vast ground (yachts, islands, mansions, helicopters, limos, penthouses etc. …) it covers, the film does deal deeply with the complicated motivations of each main character, the dynamics of families and the rift between the traditional and modern world. Within all the fun and games, extravagant sets and exotic locations, there is plenty of emotion, complexity and meaningful story to get wrapped up in.

Beyond great acting, Constance Wu and Henry Golding have an on-screen chemistry that is mesmerizing. Their relationship and storyline follows a classic and effective Hollywood narrative arc. The legendary Michelle Yeoh carries the screen impeccably and every time she appears you feel at least some aspect of the gravitas of an aggrieved parent.  The film is easily stolen by Ken Jeong and particularly Queens-born rapper Awkwafina. Am I biased? Yes. Was I born in Queens? Yes. Did I eat a lot of really “dank” halal as Awkwafina calls it in her The World According to Awkwafina YouTube video? No. —But I would have. Earlier this summer Awkwafina starred in Ocean’s Eight and has come into her own as a bona fide movie star. As quirky, streetwise, down to Earth friend Peik in Crazy Rich Asians she is more than simply comic relief but plays a fully realized multidimensional character. It’s great to have a character like Peik who you can empathize with and relate to while at the same time knowing that she can also do outrageous things —like carry various dresses for spontaneous outings like cocktail parties or “walks of shame” in her sports cars’ frunk (trunk in the front).

A big budget Hollywood film staring Asians and Asian-Americans is a rarity but with the current box office success of Crazy Rich Asians it shouldn’t take as long for another studio backed Asian / Asian-American focused feature film to light up the screen.

If you can get out and see Crazy Rich Asians on the silver screen, do it. It’s a big movie with plenty of stars, glam, laugh out loud moments, strong characters, charm and genuine feeling.