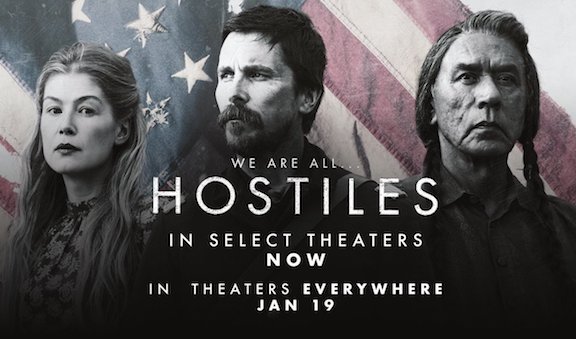 This is a split decision on the L and D report. Not putting words in my colleagues’ mouth but I got the impression he had seen all this before…and better. I myself enjoy the Western genre as much as the next person but have never really gotten that into it. To me it’s so cliché as a filmmaker to answer the question, “What would you like to do next?” with “A Western.”  It’s like you must say this or the Directors Guild of America will swoop in on horseback, six-guns a-blazin’ and take away your filmmakers card. In my life I’ve definitely mostly watched and made what I liked: foreign film, indie film, art films, documentaries.  In fact, only recently did I catch Treasure of the Sierra Madre, which is an amazing movie.  Another Western I really enjoyed was Book of Eli starring Denzel Washington and Mila Kunis. My point is that not everyone has seen everything from every genre. So here we are at Hostiles. After The Revenant, it’s tough to go back to standard fight scenes in Westerns. But Hostiles has no problem with that. The filmmakers might even celebrate it as an homage to the old style of filming action.  Also, it seemed that there was a lot of crying in this film for Christian Bale. He cried more than most of the women in an any Almodóvar film combined. Nothing wrong with your protagonist crying. But that is certainly not part of the old school Western genre. It really pushes the audience when every difficult situation calls for a close up of Christian Bale with lots of deep breathing like Tom Selleck on Blue Bloods and then a few big crocodile tears. I will say this though, like Daniel Day-Lewis in Phantom Thread, Christian Bale is one person on set I would not like to sit next to at lunch. He is so intense onscreen that I can’t imagine him in real life, just cracking a goofy joke or talking about the weather — that would terrify me. In this film, like every Tom Hanks movie, Christian Bale’s character starts out great, does great things and ends well, you guessed it, great.  His evolution from a person who hates the Other to a person who can forgive stretches your disbelief. In other words, nothing happens on this journey to cause this change in him that would not have already occurred in his many years as a soldier. He would have seen Indian nation fight against Indian nation, he would have seen treasonous and criminal soldiers acting badly towards everyone and anyone and he would have experienced random acts of kindness on every side as well.

I did have an issue in that a lot of the heroic acts of the protagonist are told and not shown. That gets to be trying. I also thought it was weird that Chief Yellow Hawk (played admirably by Wes Studi), who they were transporting back to his original sacred land, didn’t have a tribe there anymore to greet him. This was the seeming set-up when the return of the Chief was a front page newspaper headline in Act I. So visually and story wise, these were let downs. What I really enjoyed about the film was the pace. It was unafraid to linger on moments. The performance by Rosamund Pike was powerful and memorable. I also liked that the film dealt with a lot of existential issues. Westerns are great for dealing with philosophical questions wrapped up in the simple justice of the wild and a six shooter. I thought that the script employed flowing and authentic language, including Native dialect which was enjoyable. If I wasn’t necessarily wowed by the story, I thought the dialogue itself was strong and believable. I would like to give a nod to Director of Photography Masanobu Takayanagi, whose widescreen landscapes and night exterior photography were beautiful and something to write home about. If you are into ontological pondering, excellent performances, enjoy historical stories and groove on truly epic Western vistas I would recommend this film. On the other hand, if you know this genre back and forth and are looking for an original Western story shot in a groundbreaking way you won’t miss not seeing Hostiles.